In the minds of many people, power electronics are closely associated with renewable energy and electric mobility – in other words: hundreds of volts and power outputs in the medium to high kilowatt range. Less well known are the smaller elements from the "Lego® box" of modular power supplies, namely DC/DC converters. They are, however, equally important as they ensure that modern power electronics work efficiently and reliably.

Figure 1: With electric power this car can go from 0 to 100 km/h in 2 seconds – thanks to advanced SiC technology powered through DC/DC converters from RECOM. (Image source: RECOM Power)

The recent advances in the field of renewable energy have given power electronics an innovative boost. Modern IGBTs (Insulated Gate Bipolar Transistors) have played a major role in improving the efficiency of inverters. Similar to MOSFETs, they can be actuated with minimum power. When in conduction state, the loss along the collector-emitter path is as low as with bipolar transistors.

Their performance has recently been improved further through the use of new semi-conductor materials. Transistors made of SiC (silicon carbide) and GaN (gallium nitride) allow for higher currents and switching frequencies. They also accelerate the switching process and boost efficiency from around 95% towards 98% and beyond. While this might not look like a huge achievement, one must also consider that these new components help reduce energy loss by around 66% and therefore keep temperatures low!

In the context of electric mobility, one must not forget that any increase in efficiency will both lower system energy loss and increase the distance that can be driven before the battery needs to be recharged. Lower heat dissipation means less need for cooling, which in turn means less weight. With less weight, acceleration is improved and the battery range of the vehicle increases. In addition, the new SiC and GaN materials are generally able to withstand higher temperatures, and can thus be cooled more efficiently. It is reasonable to assume that the future developments in electric mobility will lead to further improvements and innovations in the field of power electronics.

Every year, the Formula Student Team of the University of Applied Sciences Munich joins up with municHMotorsport to design an electrically powered car to compete in the annual Formula Student Electric (FSE) race. Their latest model weighs less than 200 kg and goes from 0 to 100 km/h in just under 2 seconds. The three-phase motors in the wheel hubs generate up to 129 kW (174 HP) to the road. The "juice" required for this top performance is supplied by a high-voltage battery feeding the two intermediate circuits with up to 600 V.

Figure 2: This 3D model shows the electric powertrain of the PWe7.16 racing car. Each wheel is driven by a 32 kW three-phase motor. The power electronics are integrated together with the intermediate circuits in the hermetically sealed side boxes. (Image source: MunicHMotorsport).

This high voltage is generated with the help of large capacitors and powers the four inverters (Figure 3). Each of the four synchronous motors is supplied through its own inverter bridge equipped with SiC MOSFETs from Wolfspeed. To produce phase currents of up to 100 A, two MOSFETs each are wired in parallel (not shown in Figure 4) in order to keep the distance between the SiC MOSFET and the gate driver as short as possible.

Figure 3: Each one of the four motors is equipped with its own power electronics (top), whereby six SiC MOSFET pairs are combined to the bridges. The gate drivers are powered by R12P22005D DC/DC converters from RECOM. These converters are specifically designed for use in SiC applications. (Image source:  RECOM Power)

Each power switch pair is controlled through its own gate driver with extremely steep switching edges, serving as a galvanic isolator between the floating potentials of the gates and the fixed potential of the control electronics.

This is however not yet the end of the story, as each of the 24 drivers requires a voltage between +20 V and -5 V to operate along the steep switching edges while preventing faulty switching. These voltages must also be galvanically isolated from the 12 V on-board network (high isolation).

In principle, each driver requires two DC/DC converters. The  vehicle shown in Figure 2 is designed with four motors that will require an excessive 48 converters. To halve this number, RECOM has developed a special series of DC/DC converters for the supply of modern SiC MOSFET drivers. These converters of the RxxP22005D series feature asymmetric dual outputs, supplying +20 V and -5 V, as required by the drivers in the application. RECOM’s new converters use "power sharing" technology and can be operated with constant power and asymmetric current – or with constant current and asymmetric power. The modules are available with input ratings of 5, 12, 15, and 24 VDC.

Special attention has been paid to the insulation strength, which provides an extremely high isolation voltage of 5.2 kVDC for 1 minute. Given that SiC MOSFETs are generally operated at frequencies around 100 kHz and with extremely steep edges, high insulation strength is a key requirement, as the insulation barrier of a DC/DC converter is permanently exposed to high stress. Parasitic capacitance and inductance in the circuit might cause peaks that are significantly higher than one would expect based on the circuit topology. As such voltage peaks are extremely difficult to measure, fast power switches need to be dimensioned with a sufficiently large safety margin. This also applies to the maximum permissible operating temperature, where the RxxP22005 series offers very good ratings of up to +95°C.

Multitude of applications for SiC MOSFETs and IGBTs

Today, fast power switches are used in many applications and in all types of power electronics. They are found in inverters, frequency converters, induction furnaces, welding machines, motor control systems and many other devices. Most of these circuits come with IGBTs, as they are mass-produced and thus considerably cheaper than SiC MOSFETs. Like SiC MOSFETs, IGBT drivers must be powered with two different voltages, whereby +15 V and -9 V have become the standard. RECOM provides a broad choice of DC/DC converters for IGBT applications, all featuring asymmetric dual outputs. The various converter series from RECOM differ in design and insulation strength, whereby isolation voltages of 3 or 4 kV for 1 second are generally sufficient for most applications (see Figure 5). In addition, RECOM offers a range of single-output converters for IGBT and SiC MOSFET applications, which are not listed in Figure 5.

Over the last decade, power electronics have been closely linked to solar and wind energy technology. It is therefore reasonable to predict that progress made in the field of electric mobility will further accelerate the development of new power electronics over the next decade or so. There is still a lot of opportunity for improvement in IGBT technology, and using components made from SiC and GaN is only the start. 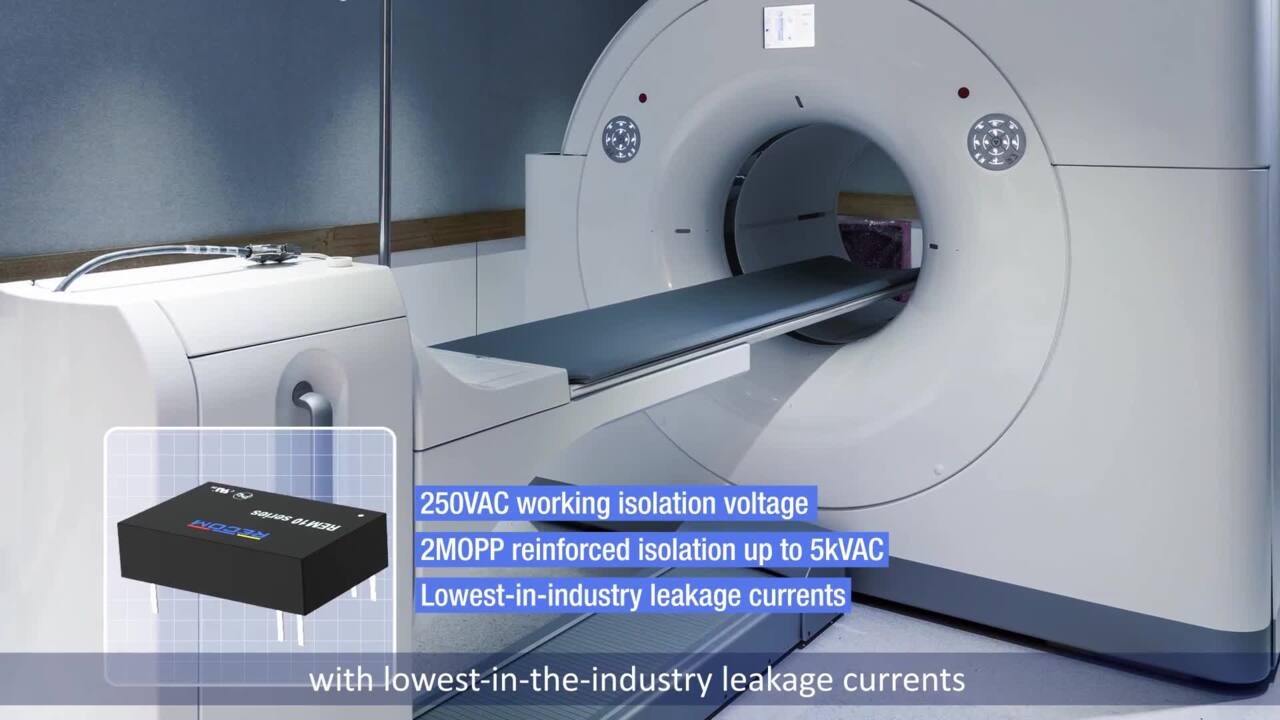 高絶縁DC/DCコンバータ 高絶縁DC/DCコンバータは、医療用途、IGBTドライバ回路、溶接機械などで使用できます。
RxS/RxD SMD Miniature DC/DC Converters RECOM's R1S, R1D, and R2S Series have been designed for fully automated manufacturing and are suitable for use with vapor phase soldering. These devices can withstand soldering temperatures of 245°C for the maximum 30 seconds as defined by the JEDEC STD-020C standard.
RACD03 and RACD06 Series LED Drivers RECOM's LED drivers provide constant current outputs of 350 or 750 mA and lead long and hassle-free product lifetimes of more than 20,000 hours.