The Human Machine Interface (HMI) is the physical, electronic or virtual environment in which interaction between human operators and machines occurs. The objective of interaction between a human and a machine at the user interface is effective operation and control of the machine or system, and monitoring of feedback from the machine, which aids the operator in making operational decisions.

LEDs and associated solid-state illumination technologies increasingly have many uses in Human Machine Interfaces and Graphical User Interfaces (GUIs), both key features of modern industrial control systems. Individual LEDs of various visible spectrum colors are used as variable condition indicators, whereas strips and blocks of them may also be deployed as backlights in panel displays often in conjunction with LCD overlays.

The latest ranges of explosion-protected, LED-based HMIs offer substantial advantages, not only with regard to the display, but also for energy efficiency, reliability and extended operational lifetime (Fig. 1). This is due to the use of LED backlight technology, which requires up to half the energy used by conventional Cold Cathode Fluorescent Lamp (CCFL) displays.

With a contrast ratio of 1000:1, LED display-based HMIs are extremely bright, making process information easily visible for users. Furthermore, LED-based backlight displays do not contain any mercury, cadmium or lead, which means that they are easier to recycle and dispose of than conventional CCFL displays.

Available in a wide range of colors incorporating the latest indium-gallium-nitride and aluminum-indium-gallium-phosphide die technology, the LED units are available with matte, satin or black chrome bezels and a large assortment of lens shapes and sizes. For coping with tough environments all parts are rated at either IP40 or IP67. Chicago Miniature Lighting said these panel mount LEDs are ideal for use in applications such as industrial control panels or other demanding environments. They are also ideally suited for transportation applications such as airplane cockpit lighting, railroad, truck and bus, ships, oilrigs and other demanding applications.

Besides being able to withstand high temperatures, and environmental threats like dust and liquids, industrial networks and HMI systems must usually be designed to avoid the creation of electrostatic interference that could either cause explosions under certain gas or dust conditions, or compromise sensitive analytical measurements. These considerations make optical rather than electronic communications attractive. So, as well as being used in readouts and display backlights, LED sources are used for data transmission in HMI and SCADA (supervisory control and data acquisition) systems.

For example, Industrial Fiber Optics’ IF-E93 is a high-output, high-speed, green LED housed in a connector-less-style plastic fiber optic package (Fig. 3). The output spectrum of the green LED is produced by a gallium nitride dye which peaks at a wavelength of 530 nm, ideally mapping to the lowest attenuation window of PMMA plastic core optical fiber, which can be an effective industrial communications medium, being more flexible and more easily prepared than glass fibers. The IF-E93 features an internal LED micro-lens, and the PBT plastic housing ensures efficient optical coupling with standard 1000 μm core plastic fiber cable.

The high output and fast transition times of the IF-E93 make it suitable for low-cost digital data links. When coupled to PMMA plastic optical fiber, attenuation is less than 0.1 dB/m, as compared to 0.16 dB/m with commonly used 650 nm LEDs. Using standard 1 mm core plastic fiber, the IF-E93 LED is capable of distances in excess of 150 m at data rates of 5 Mbit/s. Typical applications of this type of LED are for communications in local area networks (LANs), optical sensors, robotics communications, modems and fluorescent instruments.

All devices in this product line are designed for use with industry-common 1.0 mm or 1000 µm core plastic optical fiber. The construction of a typical fiber cable is PMMA (polymethyl methacrylate) core, thin fluorinated polymer cladding layer, and an additional layer called the jacket, resulting in an overall diameter of 2.2 mm. Compared with many other fiber-optic LEDs and photodetectors on the market, Industrial Fiber Optics said its devices require no fiber connection or polishing procedure on the fiber end. No connection means reduced cost for the user and network builder, who only has to use a sharp knife or razor blade to cut the fiber squarely to prepare it for operation.

Lumex, based in Palatine, Il., US and Chu Dung, Taiwan, believes the test and measurement (T&M) market – key aspects of industrial processing interpreted through HMI systems – faces unique challenges by the very nature of the applications. Because the use of optoelectronics including LED-based applications is expanding rapidly in T&M, customers are often looking for a single supplier partner to ease the burden of sourcing from multiple vendors (Fig. 4).

Lumex has, for more than 30 years, been a key player in the optoelectronics industry, with a broad range of high efficiency, high performance LED- and LCD-based systems, including standard products as well as custom designs. The company’s optical range encompasses a wide spectrum including UV, visible and infrared wavelengths.

By partnering with a variety of T&M companies, Lumex regularly brings out novel optoelectronic and display technologies for these markets. It reports that its range of LED and LCD solutions allows customers to take their applications to higher levels in performance and endurance. Product families include: high power LEDs; surface-mounted and through-hole LEDs; infrared devices; and LED displays, arrays, and backlights.

Notable recent additions to the Lumex range is an “extreme temperature” product range including: a -40°C to 85°C monochromatic LCD line; high temperature LED backlights that function up to 100°C; and capacitive touch screen TFT modules.

Lumex is a partner company in the ITW Photonics Group, which was created to bring together and build on the technical expertise of individual companies that specialize in photonics technology and span the full spectrum of wavelengths. The group consists of: Lumex (LED and LCD technology); Cal Sensors (infrared detectors and emitters); and Opto Diode Corp (LEDs, silicon photodiodes and electro-optical assembly technology). Together ITW provides photonic solutions for industrial controls, medical and military sectors.

Avago Technologies, located in Malaysia, acknowledges that the use of red, green and blue LEDs to backlight liquid crystal display (LCD) panels is "a must" for achieving a superior color gamut in monitors and TVs. In a white paper in March 2010 entitled Ultra Thin Profile RGB LED Modules for LCD Monitors and TV Backlighting, author Mok Thye Linn of the company’s Solid-State Illumination Division, commented, "The tradeoffs in using RGB-LED backlighting include the efficiency and cost of the LED assemblies."

A new package was needed to properly address this LED backlight market. Avago Technologies, therefore, developed a chip-on-board (COB) package, which combines a compact and low profile package outline with good color mixing and efficient thermal management. This package demonstrates that COB technology can still be an attractive option for LED package designers because of its cost effectiveness and its ability to incorporate simple electrical connections.

Hundreds of millions of LCD panels are being produced every year. In 2010, according to Avago, less than 1 percent of them were backlit with RGB LEDs. Many RGB LED solutions have been proposed to address this market, but none of them are able to meet the requirements of thin profile, good color mixing, simple thermal management, plug and play, and cost effectiveness. Cold cathode fluorescent lamps (CCFL) are still the industry standard for LCD monitors and TVs. Discrete LED packaging cannot cost effectively replace the CCFL solutions because of its larger size and additional effort required for color mixing and thermal management. To accelerate the adoption of the RGB LED backlight in LCD monitors commonly used in HMI systems, Avago Technologies developed the chip-on-board package RGB LED light source, as shown in Figure 5.

Figure 5: Avago’s Chip On Board package developed to accelerate the adoption of RGB LED backlight into LCD monitors, commonly used in HMI systems.

At the Society for Information Display’s 49th-annual Display Week 2011 exhibition in Los Angeles, held in May 2011, Sharp announced that it was introducing new and replacement LED-backlit panels to meet customer demand and continue its migration from CCFL-LCD products to an all-LED backlight line-up.

Sharp stated, "These displays feature specifications perfectly suited to meet the rugged demands of the industrial application market. These include excellent viewability, resistance to mechanical shock and vibration, long operating life, and performance in extreme temperatures – including reaching full brightness upon power-up, regardless of ambient temperature conditions." LED backlighting in LCDs helps lower power consumption and reduces electromagnetic interference (EMI) compared to CCFL-based products. LEDs are also mercury free, further raising the environmental performance of LED-backlit LCD products. According to Sharp, its goal is to assist customers in switching from CCFL products to LED-backlit displays, and to help designers better understand the related technology benefits and design considerations.

Several trends are emerging around the use of LEDs and related technologies in Human Machine Interfaces. Although, as with many other areas of illumination and lighting, the dominant technologies are still incandescent bulbs and conventional Cold Cathode Fluorescent Lamps, the rise of LED and other solid state lighting technologies appears to be irreversible.

The reasons are clear: a greater range of controllable colors and output powers, vastly better electrical and thermal efficiency, simple integration into flexible control and monitoring systems, and rugged constructions that can cope with tough industrial environments.

Factor in external regulation (whether from governments or industrial standards bodies) to meet environmental and energy standards and LEDs’ relatively low unit cost, and one can expect that in the near future, LED technologies will play a leading role in HMI systems. 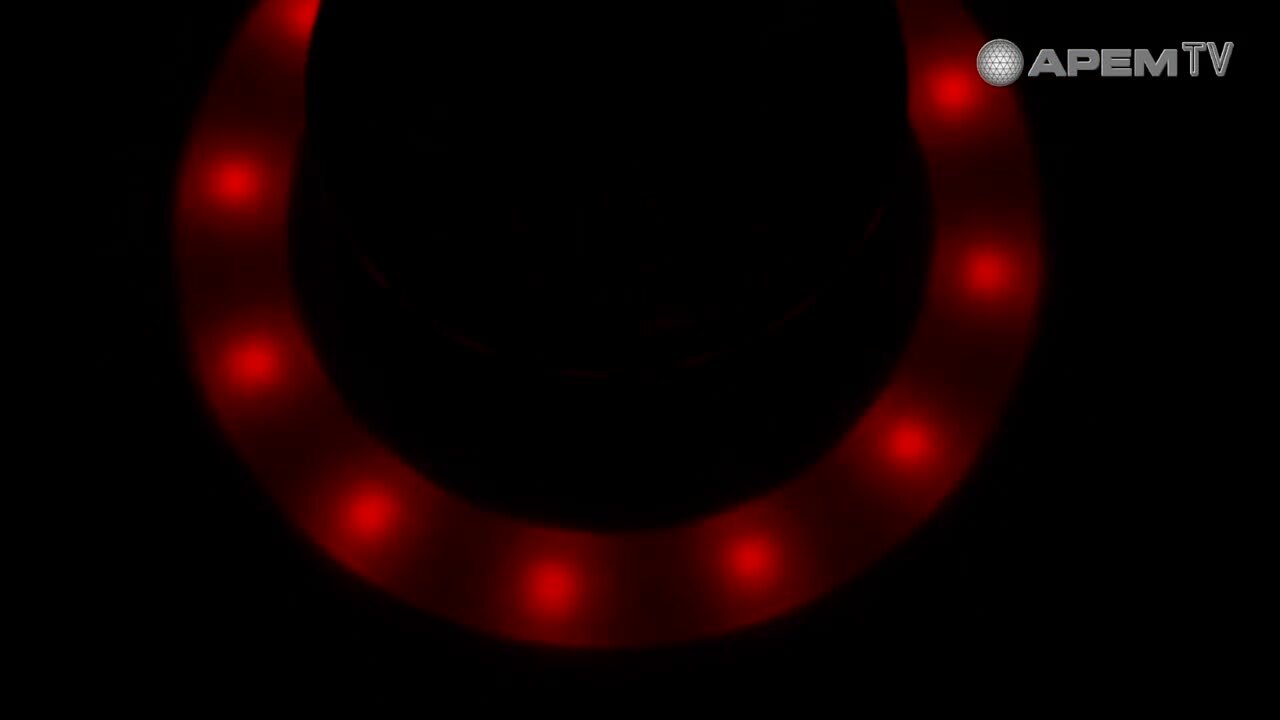 Introduction to the RAMO T and RAMO I series