Temperature sensors are widely used in many applications to control and monitor the temperature of the system and take actions accordingly.

In a majority of the cases, the temperature sensor is an Integrated Circuit (IC) chip or a module that outputs the temperature information via various interfaces to an MCU which, based on this reading, decides what action to take.

This approach has a lot of advantages but requires understanding in electronics, involvement in the design process and time to implement.

If a simple ON/OFF functionality is required, like for example, just to turn on the fan or temporarily turn off the power supply if a system is getting hot and come back to normal operation when it is getting cooler again, mechanical thermostats like those pictured in Figure 1 have been used for many years.

These mechanical thermostats are based on bimetallic elements which are two pieces of different metals expanding at different rates as they are heated and are bonded together to form a bimetal disc or strip.

The strip works as a bridge in an electrical circuit connected to the power supply flow. Normally, the strip carries electricity through the circuit. When the strip gets hot, one of the metals expands more than the other so the whole strip bends and breaks (opens) the circuit (Figure 2).

Some of the mechanical bimetallic thermostat vendors that Digi-Key carries include Bourns, Cantherm, Honeywell Sensing, Littelfuse, and Sensata.

In some other cases, thermistors (NTC or PTC) are used (Figure 3). They monitor the temperature by resistance change due to temperature change. But they still need control circuitry and a physical switch to provide ON or OFF functionality.

KEMET recently introduced thermostat switches based on a patent technology

from Tokin (a vendor acquired by KEMET in 2017). In a nutshell, the technology is based on French physicist Pierre Curie’s discovery that at a certain temperature a permanent magnet will lose its magnetic properties. This temperature is now known as the so-called “Curie Point”. Using some patented techniques, TOKIN has created a material which can control, monitor and adjust this “Curie Point”. This material, known as Thermorite®, combined with a well-known reed switch technology, creates a thermal switch which opens or closes when this very specific and tightly controlled temperature (also known as a “set point” or “trigger temperature”) is reached (Figure 4).

The primary advantages of Thermorite switches are:

Table 1 shows the basic comparisons between these two technologies.

The break type switch consists of a Thermorite cylinder that surrounds the reeds. At both ends of the cylinder are ring-shaped permanent magnets as shown in Figure 5.

Below the temperature set point (trigger temperature), the Thermorite acts as a magnetic material and creates a single magnetic field that acts on the opposing permanent magnet poles in the reeds, causing them to be connected, thus turning the switch "ON".

When the temperature set point is exceeded, the Thermorite loses its magnetic property. At this point the single magnetic field becomes two separate fields associated with the permanent magnets at each end of the switch, causing the contacts to separate. This turns the switch "OFF".

The make-type switch has a similar structure to the break type, except for an additional spacer (gap) inserted in the middle of the Thermorite cylinder to create an action opposite to break-type switch behavior as shown in Figure 6.

Below the temperature set point (trigger temperature), the spacer causes the permanent magnets and Thermorite to create two independent magnetic fields that act in a similar way to those of the break-type sensor in high-temperature mode. The contacts are separated and the switch is turned “OFF”.

When the temperature set point is exceeded, the Thermorite loses its magnetic property. At this point, two independent fields of the permanent magnets act on the ends of the reeds causing the contacts to stick, thus turning the switch “ON”.

Table 2 summarizes the switch states at temperatures above and below the set point defined by Thermorite composition.

Table 2: Summary of switch status at temperatures above and below set point.

KEMET offers two series: the TRS series and the OHD series. Both series have “break (ON/OFF)” and “make (OFF/ON)” types.

The TRS thermal reed switch series are high-precision sensors for temperature-control applications, offering a standard accuracy of ±2.5°C. There are six product lines, which are available in the following packages (Figure 9):

The TRS series supports a wide range of operating temperatures from -10°C to +130°C. Some TRS5 devices are certified to UL, CSA and VDE safety specifications.  Designers can choose 100 V or 200 V voltage ratings and maximum power ratings from 6 W to 72 W.

Figure 10 shows the available packages for the OHD series.

Table 3 summarizes the main differences between the TRS and OHD series.

Table 3: The differences between the TRS and OHD series.

In a test of these sensors, the two parameters highlighted in Table 4 were focused upon.

The TRS5-60BLR00V and TRS5-100BLR00V sensors were connected in series between the hot mains wire and the bulb holder wire.

Measuring the sensor temperature using Klein thermometer is rather challenging.

The final experiment set up is as in below Figure 17.

Plugging the bulb with the TRS5-60BLR00V or TRS5-100BLR00V sensor in series to the mains turns the bulb on. Then the candle was used to heat the sensor.

The next step was to check the “Differential Temperature” parameter which is specified in Table 4 as “10°C Maximum”.

Video 2 shows this experiment. After the sensor reached its switching temperature at 61.4°C for the 60 degree sensor, TRS5-60BLR00V and the bulb turned off. The heating element – the candle – was then moved away from the sensor.

For the 100 degree sensor TRS5-60BLR00V, the tests showed the same results: the “Differential Temperature” was determined to be in the range of 3°C to 4°C.

The KEMET OHD 60 degree sensor OHD1-60M was connected in series between the 5 V power supply from the ADALM2000 and the LED (Figure 25).

Like in the first experiment, the OHD1-60M sensor was wrapped in aluminum foil together with the Klein thermometer probe.

As long as the sensor temperature was less than 60°C, the LED was turned off. At the temperature 59.2°C, the LED turned on. Video 3 demonstrates this process.

Repetitive tests showed the same behavior of the sensor. The LED turning on occurs in the temperature range between 59 – 62°C, meeting the specification in the data sheet.

The “Differential Temperature” also was in the range of 3 - 4°C below the “Switching Temperature”.

Implementing KEMET’s TRS and OHD series temperature sensors as ON/OFF temperature switches is very simple, and they provide accurate results without sacrificing precision, stability and reliability. They are available in various voltage ratings, form factors, and a wide range of the switching temperatures. They come in normally open (break type) or normally closed (make type) configurations. 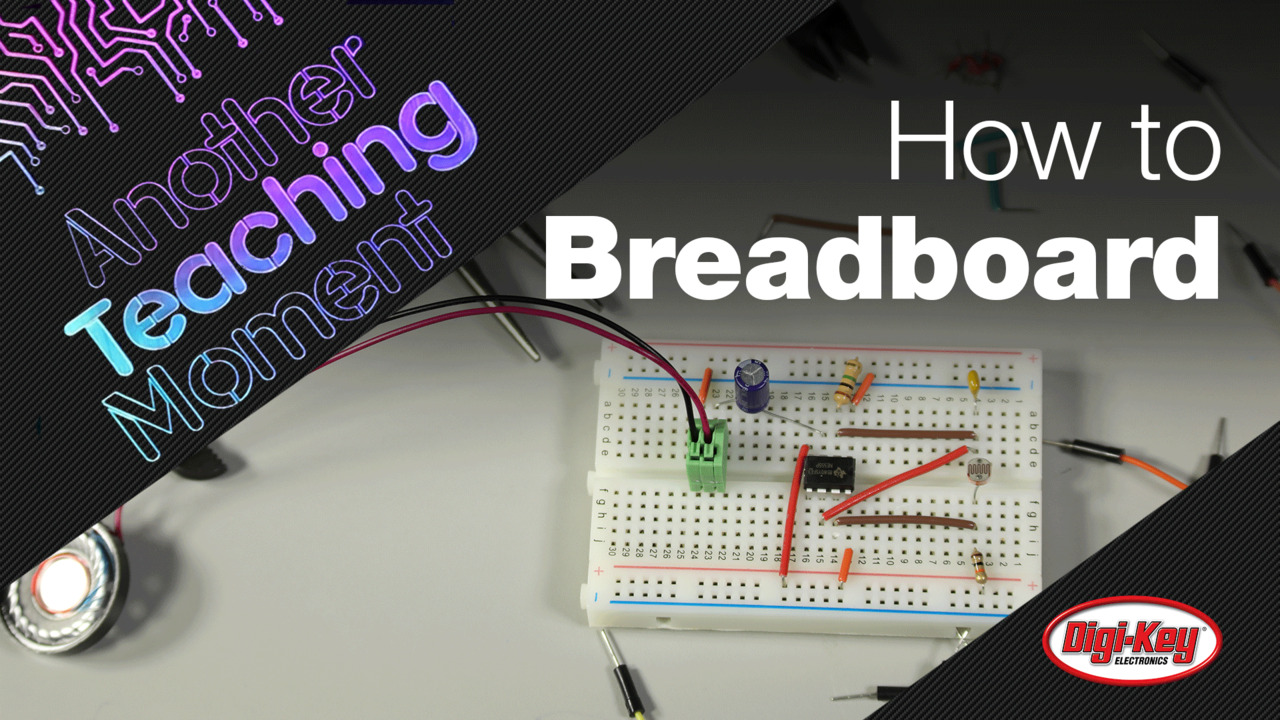 How to Breadboard - Another Teaching Moment | DigiKey Electronics 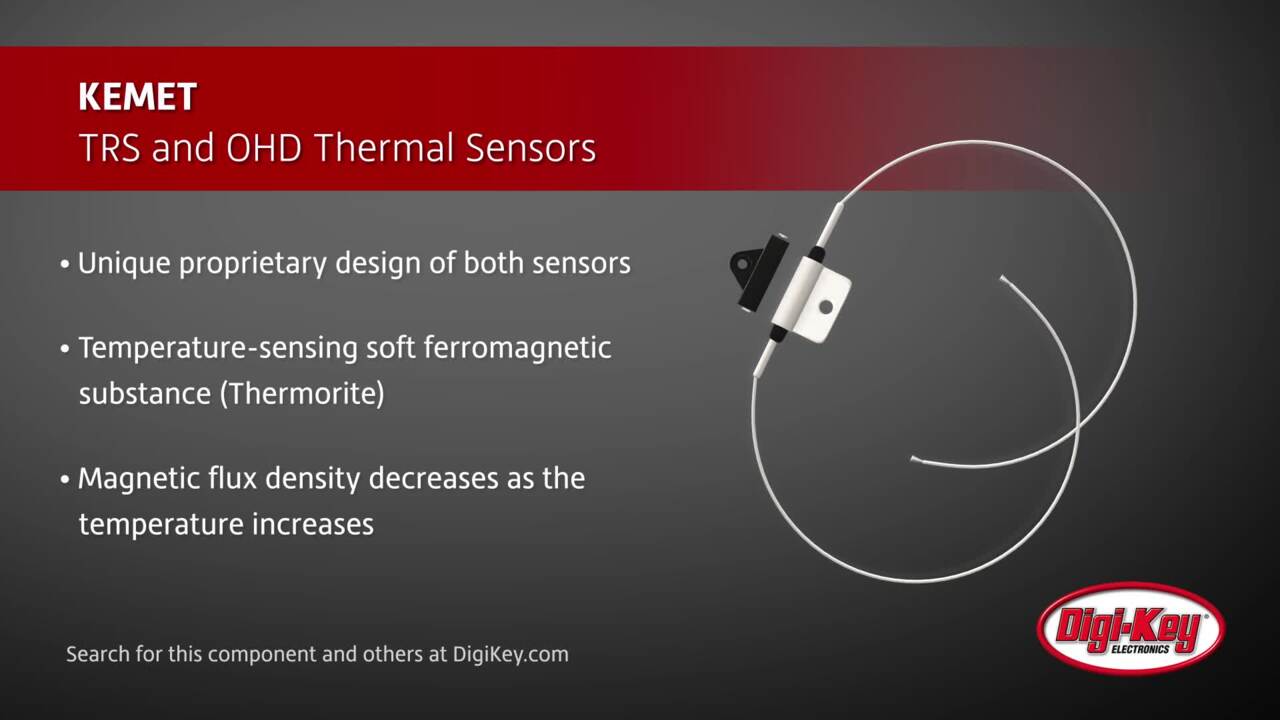 Dany Haikin, Regional Application Engineer & Technical Support Manager at Digi-Key Electronics, has been with the company since 2012 with primary responsibility for applicational and technical support of Digi-Key customers in Israel and the Middle East. He has over 33 years of experience in the electronics industry and holds an Electrical Engineering degree from the Technion – Israel Institute of Technology.

Digi-Key Electronics, based in Thief River Falls, Minn., is a global, full-service provider of both prototype/design and production quantities of electronic components, offering more than six million products from over 750 quality name-brand manufacturers at Digi-Key.