The ability to authenticate data or operations in a system is a fundamental requirement for security. For developers, implementing the detailed steps required for authentication can be challenging, particularly in resource constrained systems. Even when resources are available, time to market pressures and lack of awareness can result in shortcuts during development that can leave the final system compromised.

What’s required is a fundamental understanding of how authentication works, and a solution for developers that incorporates both the required resources as well as the support to implement authentication much faster and effectively.

The critical role of authentication

Authentication remains one of the core requirements for security, and finds applications across nearly every segment including consumer, industrial, medical, mil/aero, and more. On the Web, authentication is used in browsers to validate the identity of secure (https) servers. In IoT devices, authentication is critical for ensuring that firmware updates only come from legitimate sources. On a smaller scale, authentication is used increasingly to ensure use of authorized peripherals or even consumables in systems where mismatches can impact power, safety, and reliability.

For example, an unauthorized sensor device connected by accident or by intention to an industrial automation network could affect data streams used in process control loops. In these applications, the need for authentication goes both ways. After authenticating itself to a host, a device that operates actuators, lasers, or other external equipment should operate only after authenticating commands that could result in physical harm or damage.

Authentication methods differ widely. In its simplest and most common form, individuals use a password to authenticate themselves to systems and applications. This notoriously weak form of authentication has driven the use of two-factor authentication or biometric methods such as Apple Touch ID fingerprint recognition or Windows Hello facial recognition.

Figure 1: In symmetric cryptography, the host and slave device use a shared secret key for authentication. (Image source: Maxim Integrated)

In asymmetric cryptography authentication, the secret key resides only in the slave device, which combines it with an SHA-256 hash of the challenge data and a random number to generate a new Elliptic Curve Digital Signature Algorithm (ECDSA) signature, typically based on the elliptic-curve cryptography (ECC) P-256 curve. In turn, the host verifies the new ECDSA signature using an SHA-256 hash of the challenge data and the public key associated with the device's private key. If the result is valid, the slave device is considered authenticated (Figure 2).

For developers, implementation of these authentication methods can be challenging to say the least. Failure to execute the precise sequence of operations with the required data can result in failure. The lack of a true random number generator or just a simple mistake can leave an otherwise secure device open to attack. Even technically correct implementations can present vulnerabilities to skilled hackers. For example, a commonly used authentication protocol permits reuse of secret information, even though those secrets could be captured and used to respond correctly to authentication challenges – and so compromise communications and connected systems.

In many cases, mistakes or vulnerabilities arise from shortcuts used to implement authentication due to a lack of robust mechanisms that are able to perform authentication more rapidly and reliably. For example, the authentication vulnerability mentioned above typically arises when developers are concerned about performance and reuse secrets rather than incur delays associated with (relatively) slow authentication execution.

In the IoT, developers might face practical limitations that simply make implementation impossible, or invite use of shortcuts that introduce vulnerabilities. The MCUs used in IoT sensor or actuator devices might lack the processor horsepower and memory resources required to implement authentication correctly or at all. The problem becomes even more evident in peripherals or consumables that lack an MCU entirely. The emergence of integrated authenticators such as Maxim Integrated’s DS28C36 and DS28E38 has significantly eased the complexity of employing authentication in any system.

With its comprehensive set of crypto engines, storage, and algorithm support, the device can turn complex authentication processes into a simple go/no-go result. For example, to verify firmware for MCU secure boot, developers need only program the MCU to send the target firmware and signature to a DS28C36 connected via an I2C interface. The DS28C36 in turn performs the complete sequence of operations required for authentication and returns a go/no-go result to an MCU GPIO pin (Figure 3).

Developers can use the DS28C36's programmable I/O pins to support command authentication in applications where activation of a laser, relay, or other actuator can result in potential hazards in the physical environment. Here, developers could drive the go/no-go result of the authentication process to a DS28C36 output pin controlling a buffer transistor such as the Nexperia PMV65XP MOSFET driving a laser (Figure 4). With this approach, only valid commands would be allowed to control the peripheral.

For some applications, however, the need to load secret keys into an authentication IC would be a potential security weakness for mission critical devices, or simply too cumbersome for volume products such as consumables like printer cartridges. For any application, the mere presence of the secret key that controls access to a product causes the product and underlying authentication device to become the target of hackers looking to recover the key through more sophisticated attack mechanisms.

The Maxim DS28E38 authentication IC provides a unique approach to mitigating key threats by providing a built-in key based on Maxim’s patented ChipDNA™ technology. ChipDNA uses the random variations in semiconductor device characteristics to provide a physically unclonable function (PUF). The PUF feature is used to create a unique secret key that remains constant over time and under different operating conditions, including operating voltage and temperature. The only way the PUF output (and resulting key) changes is if someone attempts to probe low level chip operations. Such operations change underlying circuit characteristics, resulting in a different PUF output and a different secret key. It’s a kind of “Heisenberg Uncertainty Principle,” but applied to secret key storage. For applications that require a specific private key, the device nevertheless allows developers to load and use their own keys instead.

The PUF-based DS28E38 integrates a complete set of security features to provide a turnkey challenge-response authentication solution. Unlike the DS28C36, however, the DS28E38 supports only asymmetric authentication, returning an ECDSA signature in response to a challenge (Figure 5). The host remains responsible for using the device's ECDSA signature with the corresponding public key to complete the pass/fail verification process as illustrated earlier in Figure 2.

Besides the PUF-based secret key, the device provides 2 Kbits of secure EEPROM storage, as well as a separate unique 64-bit identifier (ROM ID) and manufacturing identifier (MANID). Using the device's secret key, unique identifiers, and secure storage, developers can use the DS28E38 in a wide variety of authentication scenarios.

For example, to authenticate a printer cartridge, developers could authenticate the cartridge with known values of the MANID to confirm a model type. As with the DS28C36, developers can use the DS28E38 to dynamically generate private/public key pairs to support more complex authentication protocols.

For hardware integration, the DS28E38 provides a 1-Wire interface, enabling a simple connection directly with MCUs such as the MAX32625 that include native 1-Wire support. For other MCUs, developers can connect the device to an MCU programmable I/O (PIO) port using a single PMV65XP MOSFET (Figure 6).

Figure 6: The DS28E38 1-Wire interface provides a simple connection to 1-Wire MCUs such as the Maxim MAX32625 and requires only an additional MOSFET to interface to a programmable I/O port on any MCU. (Image source: Maxim Integrated)

1-Wire waveform timing requirements are well within the performance of even simple MCUs. As a result, developers can implement the 1-Wire protocol with a few lines of software (Listing 1).

tickDelay(B); // Complete the time slot and 10us recovery

// Loop to write each bit in the byte, LS-bit first

// shift the data byte for the next bit

Figure 7: Developers building systems with multiple 1-Wire devices can use the Maxim DS2484 to connect the DS28E38 authentication IC with other 1-Wire devices to an MCU's I2C bus. (Image source: Maxim Integrated)

With the DS2484, developers can use the DS28E38 in combination with a broad array of available 1-Wire devices including sensors, battery management ICs, EEPROMs, and more. In this configuration, developers can easily use the DS28E38 to provide authentication for critical operations involving those 1-Wire peripheral devices similar conceptually to that shown in Figure 4 for a DS28C36-based design.

Although both the DS28C36 and DS28E38 present simple hardware interface requirements, the real effort in incorporating authentication in a design lies in building these mechanisms into higher level processes and applications. To accelerate this process along, Maxim provides a number of evaluation kits that designers can use to quickly gain experience with the functionality of the DS28C36 and DS28E38 authentication ICs. To evaluate the DS28C36, connect to the MAXAUTHDEMO1# evaluation board via USB (Figure 8).

An accompanying DS28C36 secure download software program provides a basic demonstration of authentication operations. On the signing process screen, developers use the software to create a signature for a test file (image files in this case). On the second screen, they use the DS28C36 to authenticate the original file against that signature: the same process used to authenticate firmware in a secure update process (Figure 9).

The Maxim DS28E38EVKIT# provides a similar platform for exploring operation of the DS28E38. After plugging the DS28E38EVKIT# into a PC USB slot, running the accompanying software demonstrates authentication, key pair generation, certificate generation, and other features and functions. For further software development using the DS28E38, Maxim also provides its MAXREFDES168# software reference design for use with its MAX32625 MCU-based MAX32625MBED# MBED eval kit. Sample C++ code in the reference design demonstrates the steps used to build command sequences used to operate the DS28E38 (Listing 2).

Authentication mechanisms lie at the heart of any secure environment. For developers, however, implementation of these mechanisms brings multiple challenges for meeting practical performance requirements while also maintaining security at each step of the authentication sequence.

With the emergence of dedicated authentication ICs, developers can easily address these challenges and meet emerging requirements for authentication across diverse application segments. Using these dedicated devices, engineers can quickly incorporate authentication in designs targeting applications as complex as the IoT or as simple as printer cartridges. 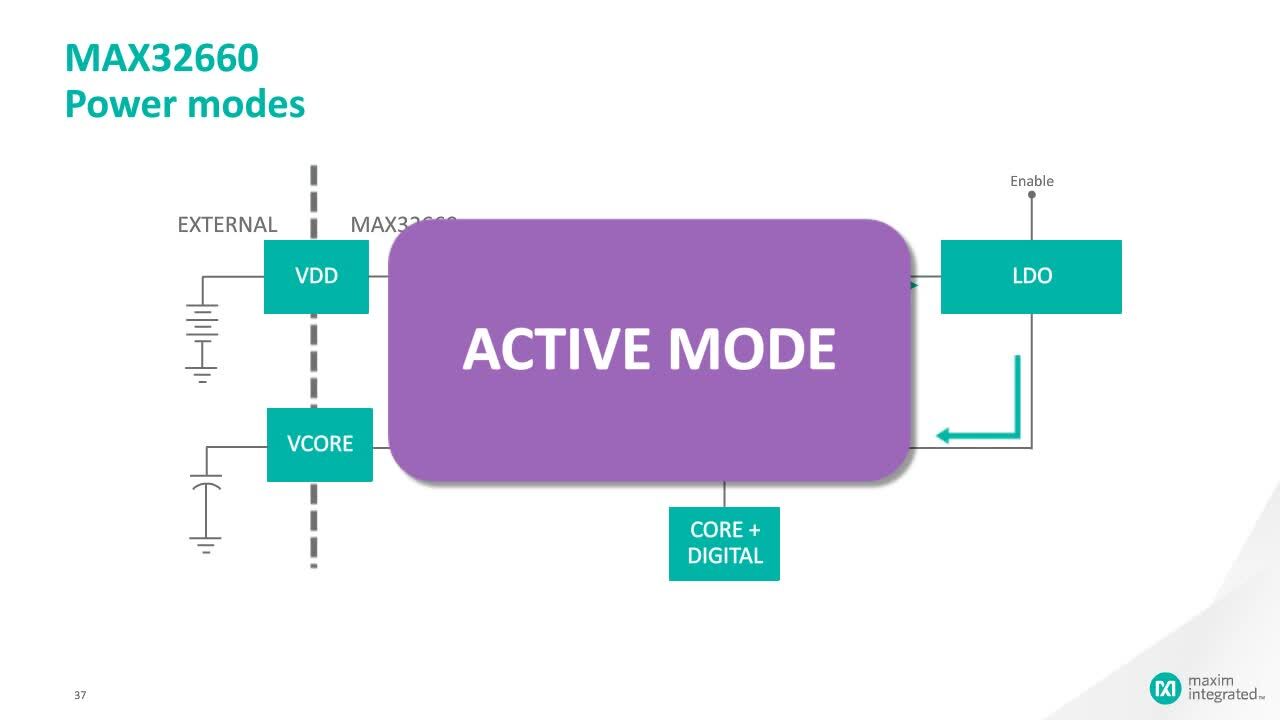 How to Setup the DS28E38 Evaluation Kit and Perform ECDSA Authentication

Stephen Evanczuk has more than 20 years of experience writing for and about the electronics industry on a wide range of topics including hardware, software, systems, and applications including the IoT. He received his Ph.D. in neuroscience on neuronal networks and worked in the aerospace industry on massively distributed secure systems and algorithm acceleration methods. Currently, when he's not writing articles on technology and engineering, he's working on applications of deep learning to recognition and recommendation systems.